My husband and I spent 5 years renovating our home, it was a long 5 years.  Its true what they say, renovating with your spouse is intense.  But we made it through and we love our house.  There is definitely something to be said about doing the work yourself.  Painful as it is, you take so much pride in knowing that you painted those walls, you laid those tiles and you sanded that drywall over and over and over and over.

We have been done for about 4 years and yikes, I am starting to feel the itch to start making updates already.  But now that we have two small children, we just don’t have the time (or money) to make big updates to our house (plus my husband would kill me if I even suggested it).  However, you can still make small changes that have a really big impact.  So my plan is to make small updates throughout the house, mini makeovers if you will, to satisfy my urge to decorate.  And I am starting with our bedroom.

With our bedroom, it was a simple as a new duvet.  We’ve had the same grey and white striped duvet for a few years and I was tired of it. I also felt it was a little too dark and I wanted to brighten things up.  See the before pic above.  At the time I was on a sequin kick – terrible pillow decision.

I looked through alot of duvets before I landed on this one.  I knew I wanted something white with some texture.  And I didn’t want to spend much more than $100.  Believe it or not, I had a hard time finding ones I liked.  Everything was either too simple or too fussy/detailed. I finally found this white pom pom fringe duvet on Amazon and it has made such a difference.

Here are the details on the duvet cover we ended up with as well as those that made the shortlist.

Pom Fringe Duvet Cover. Amazon.ca | Ultimately I landed on this because I love pom poms.  I felt it added a bit of whimsy to a very neutral space.  Although I will definitely have to be careful washing.  All the reviews said to turn it inside out and use the delicate cycle to reduce pom pom loss.  And there are matching pillow shams too. The duvet isn’t quite as white as it appears in the top picture.  Its more off white as pictured below. 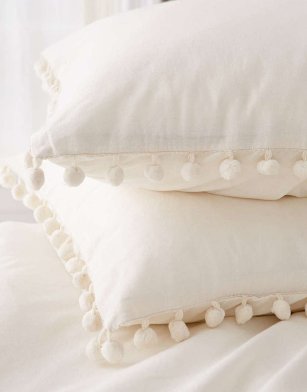 Textured Duvet.  Structube | This was my back up if I didn’t go with the pom poms.   I love the texture on this but its still so simple. And its less than $100. 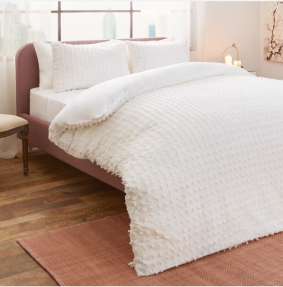 Black and White Tassel Duvet Cover and Shams.  Urban Outfitters | I love how sleek the contrasting fringe is on this set.

And the Urban Outfitters tassel duvet comes in a ton of colous.  But I love it in the classic white.

Tufted Duvet Cover.  Urban Outfitters.  I like how the tufting is used as an accent at the bottom of this duvet cover.

Stay tuned for more mini makeovers.  I think the dining room is next on my list.